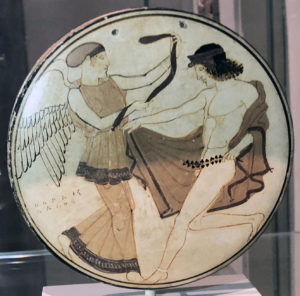 Often listed as a “Greek yo-yo” this is a bobbin or decorative piece. Photo by Lucky Meisenheimer.

Two ceramic bobbins, discovered from approximately 500BC in ancient Greece, have for decades been erroneously described as yo-yos. This inaccuracy has been traced to comments made in the mid 19th century by the archeologist Ludwig Ross. He noted the archeological finds had a similar shape as a bandalore (yo-yo) toy and he falsely believed the proof of this conjecture was a picture on a bowl showing a young man playing the toy.  What he did not know at the time was that the image on the bowl was an aryballos, not a yo-yo. (Click here to see why he was mistaken) For 150 years this factual error has continued to be repeated. Ross himself realized there were flaws in his postulation that he could not explain such as terracotta material would not have been the choice of medium to produce a  working yo-yo. One strike to the ground would have shattered the piece. Also, there was no hole in the cylinder shaft to fasten the string as was typical with the toy in the 19th century. 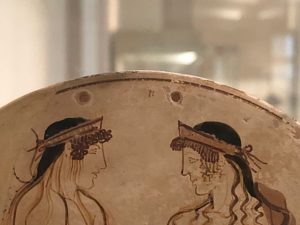 This specimen has holes drilled through both sides. Certainly not an addition needed for a functioning yo-yo.

The majority of historians, even then, believed these objects all represent bobbins or served as other decorative functions. Otto Benndorf pointed out in his book “Greek and Sicilian Vase Pictures” which was published in 1869 the subject material depicted in the artwork “mostly relate to adventures with women on both specimens.” 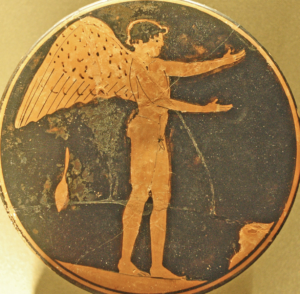 A bobbin showing the greek god Eros. Not the subject material you would place on a child’s toy.

Unfortunately, the bobbin history is not as fascinating as promoting these as being early yo-yos so only Ross’s opinion continued to be embraced over the years.   To rectify the glaring inconsistencies, a theory was promulgated that these represented embellished replicas of toy yo-yos. The hypothesis being they were ceremonial offerings to the gods as a right of passage to adulthood. There is no evidence or documentation that the theory is credible nor did this idea get published until the late 20th century. An observation nullifying this theory is that both of these bobbins were discovered in grave sites and one was in the hand of an adult female. Additionally, one specimen has holes drilled in it (likely for hanging), this would also refute the yo-yo theory.

The false statement that the yo-yo was discovered or invented by the ancient Greeks is solely based on these bobbins. Even in my book “Lucky’s Collectors Guide to 20th Century Yo-Yos – History and Values” I also incorrectly cite these bobbins as yo-yos; a myth that needs correcting in the history books. 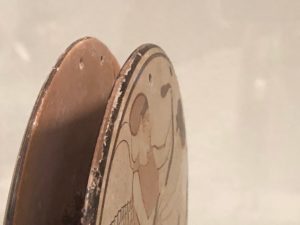 The wide gap, large size and fragility of the piece also precludes it from being used as a toy.