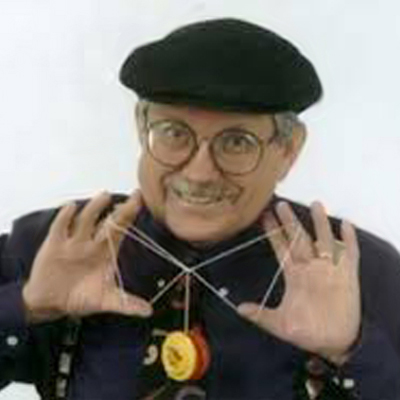 Dale Myrberg began his yo-yo career demonstrating for Duncan in 1954 at the ripe old age of 13. By the age of 15, he was the top player in Utah.
Following a hiatus of nearly twenty years, he picked up the yo-yos again and never looked back. Demonstrating for Duncan and Hummingbird, he found he preferred entertaining over demonstrating. In 1988 he performed on The Smothers Brothers Show along with yo-yo legends Harvey Lowe, Barney Akers, and Bob Rule.
He organized the return of the Utah State yo-yo championships in 1989. He was runner up in the first modern world yo-yo championships held in Montreal in 19992 and later won the world championships in 1996 (the oldest person to win a world title). He held six AYYA open world records at one time, the most any person has held at once. He has generously given his time to support the yo-yo movement, virtually never missing the nationals and world championships; he has been a frequent judge. In 1995 he was one of the first three to be honored with the National Masters title, and in 2001 he was elevated to the title of National Grand Master.