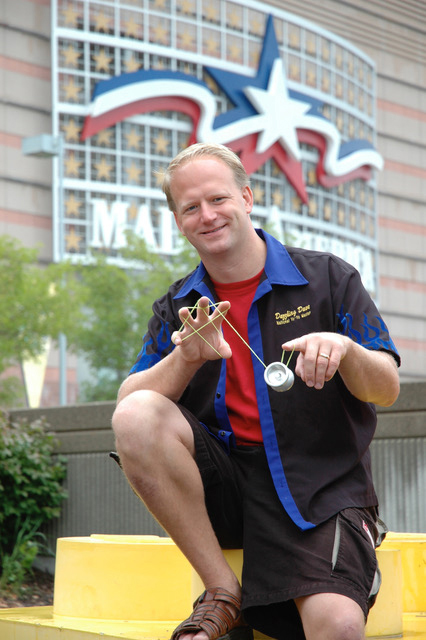 Dazzling Dave Schulte began as a professional yo-yo player in 1998. Since that time, the highly acclaimed champion has circled the globe performing. A former middle school teacher, Dave’s heart and soul are still in teaching – but now he’s found a better way. He delivers intensely fun freestyle performances followed by friendly hands-on instruction. Dave teaches his “students” hand-eye coordination, goal setting & achievement, performance techniques, and the fundamentals of physics, all through the Science of Spin program and his hand-held classroom on a string. Judges have peppered Dave with awards throughout his professional career, impressed by the energy of his performance style and his mastery of the most advanced yo-yo tricks.

In October of 2001, Dazzling Dave was named to an elite group of National Yo-Yo Masters, making him one of the exclusive members of the National Yo-Yo League judges panel. He has served as a judge at multiple World and National Yo-Yo Championships. Dazzling Dave has toured Japan, Korea, Australia, France, and much of the United States. Currently, Dave lives in Minnesota and gives over 150+ shows each year. Additionally, he has an incredible collection of over 2,000 yo-yos collected from around the world.