Dennis McBride was lucky to grow up in California, just a few doors down from multiple-time woman’s state yo-yo champ Connie Scarlet. So when he asked her to show him how to play the yo-yo, she responded she would, but only if he promised to practice, and practice he did.

Dennis became one of the top players in California, which had the best-organized yo-yo tournament system in the country overseen by Duncan’s Bob Allen. The California tournaments progressed from neighborhood contests to city championships, followed by regional competitions and cumulating in the state championships. McBride won at all levels, and in 1955 he was in the sights of Duncan when they were asked to provide a boy and girl yo-yo champion for a Disney Film. He and his mentor Connie Scarlet performed in a cutting-edge 3D movie in the Mikey Mouse Club Theater in Disneyland. He worked with the original Mouseketeers and was paid the princely sum at that time of $150 for his efforts.

In 1988 he produced what was to be one of the first VHS yo-yo instructional videos known as The Know-Yo Yo-Yo video series. Ten years later, he became one of the founding members of Team High Performance (THP) in Hawaii, teaching many younger members how to do two-handed tricks. The touring of THP was the impetus for the great yo-yo craze of 1998 and 99. Dennis is a recipient of the Harvey Lowe Lifetime Achievement Award, and he is one of the four original National Grand Masters. 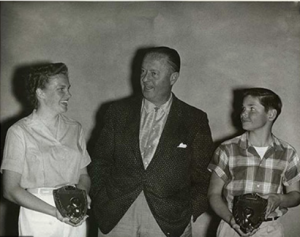