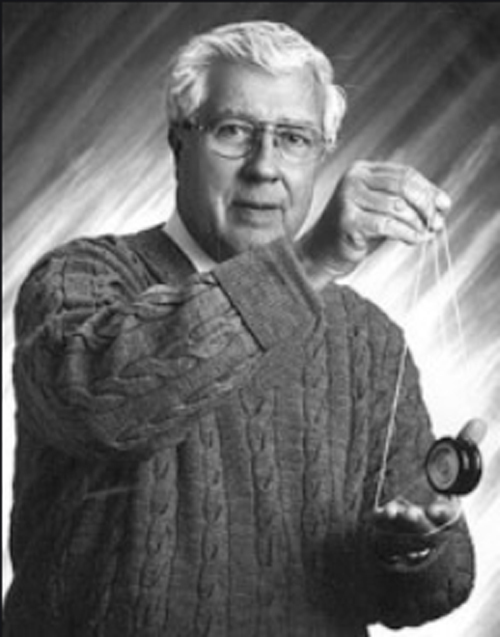 Don Duncan, Jr. was born in Chicago on May 14th, 1927, just a few years before his father established the Duncan yo-yo company. Don Jr. was named president of the company in 1950. Following his father’s retirement in 1957 he took over complete control of the Duncan Yo-Yo Company along with his brother Jack. At the time, the Duncan Yo-Yo was the most recognized yo-yo brand in the world and dominated yo-yo sales producing 85% of all yo-yos sold in the United States. Duncan continued to maintain the company’s market leadership, and in 1962 the company produced the largest yo-yo craze in America by introducing paid television advertising. In 1962, Duncan sold more than 45 million yo-yos. The Duncan Yo-Yo plant produced 60000 yo-yos per day with 640 employees in its peak production and 7 million dollars in sales. After closing the plant in 1965, Duncan had a several-year hiatus from manufacturing his yo-yos. Still, in 1974, he again re-entered the market, producing the Pro-Yo under the Duracraft name and later changing the title in 1987 to Play Maxx. Duncan was a founding board member of the American Yo-Yo Association. In 1992 he helped fire up the interest in yo-yos by taking part in the nation wide “Return of the Yo-Yo Exhibit” that featured antique yo-yos, photos, and other memorabilia. Even after he retired from the manufacturing of yo-yos, Duncan has continued to give back to the yo-yo community. Duncan died in an automobile crash in New Mexico, which killed both him and his wife Donna in 2003. He was 76 at the time of his death.