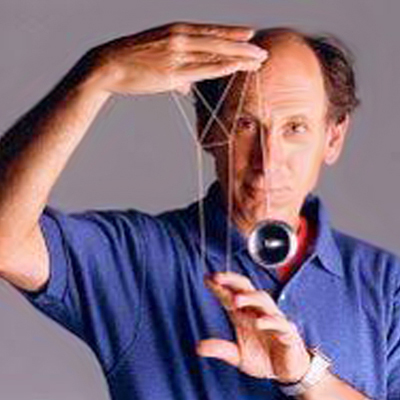 Tom Kuhn, a San Francisco dentist, is best known amongst yo-yo players and collectors as a producer of high-quality wooden yo-yos. In 1976 he came up with a unique yo-yo design, a take-apart modular yo-yo, the No Jive 3 in 1. Kuhn also created the Silver Bullet, the first full-metal yo-yo, and the Silver Bullet II, the first mass-produced ball bearing yo-yo. Kuhn has created multiple other yo-yos and has received several yo-yo patents. In 1979, he produced the world’s largest functioning yo-yo. The yo-yo had a 50-inch diameter and weight of 256 lbs. A crane was required to operate it. This yo-yo received a listing in the Guinness Book of World Records. One of his yo-yos embedded with 75 diamonds, 25 rubies, and 25 emeralds by jeweler Sydney Mobell had an asking price of $10,000. In 1992 astronaut, Jeffrey Hoffman played with a Silver Bullet-2 aboard the space shuttle Atlantis.